She Saved Thousands of Best Friends. Then Covid-19 Killed Her. 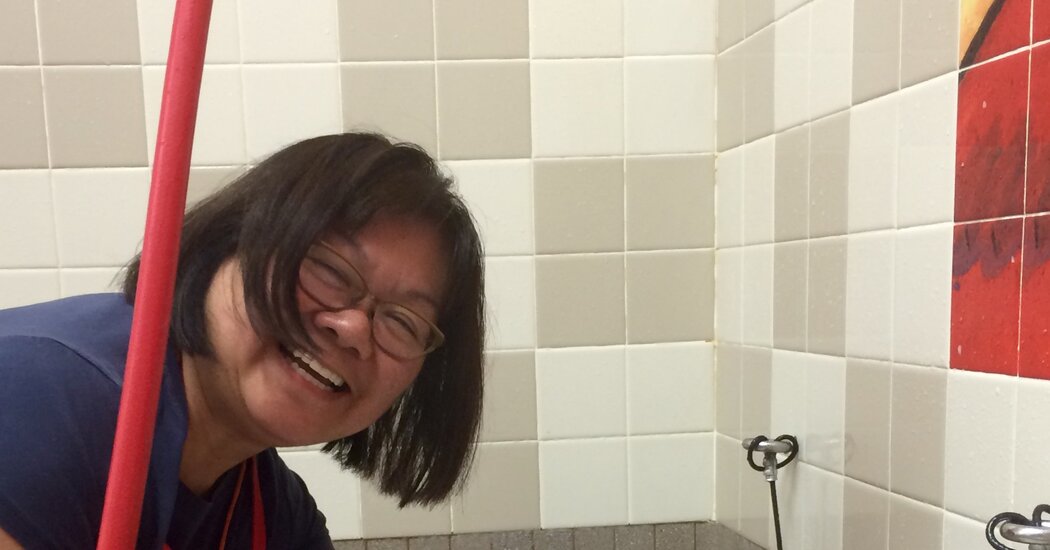 Valerie Louie saved our beloved Uncle Mort from a life of abuse. Then she became a pandemic casualty. Her death is being mourned by households with four-pawed members across San Francisco and the Bay Area.

Ms. Louie spent two decades rescuing dogs like Uncle Mort from shelters and finding them homes like ours anxious to have a new best friend. Her specialty was rescuing the truly abandoned and broken pup, the abused, the blind, the deaf and the long in tooth.

The day she dropped off the sad-eyed mutt I’d identified at one of her shelter events, the little guy promptly deposited a poop on our dining room carpet.

“It’s just a little one,” Ms. Louie said. She had a generous smile and the patience of a member of the clergy.

Ms. Louie, who died of Covid-19 on Nov. 25 after two weeks in an intensive care unit, didn’t just save rescue dogs. She saved people too. She was a nurse and worked for 32 years at Highland Hospital in Oakland, starting in the emergency department. Her last position was coordinator of advanced life support.

She was a single mother. She leaves behind her son, Andrew Louie, 21, who lived with her and also was infected with the coronavirus in late October. He has since recovered.

Ms. Louie died at the Mission-Bernal campus of California Pacific Medical Center in San Francisco, the city where she was born and raised. She was 60. Her legacy lives.

“I cannot fathom how many dogs she saved, probably thousands,” her son said, echoing a figure estimated by fellow volunteers. She farmed out the canines to families after retrieving them from shelters, including so-called kill shelters in central California where many dogs get bred, adopted and abandoned.

Friends said she had a particular knack as matchmaker between dog and family. She would keep a mental log of the people seeking rescue dogs, and when the right fit came along, she would call with the good news.

Some dogs she kept — like Ida, a French bulldog found in the mountains of China in 2012. The person who found the dog, abandoned and blind after it had been used for breeding, discovered Ms. Louie on the internet through an organization called Rocket Dog Rescue that she worked with at the time. Ms. Louie arranged to have the dog flown to San Francisco, her son said.

“She was a powerhouse,” said Meg McAdam, a close friend who also rescues dogs and works at Oakland Animal Services, “and a San Francisco institution.”

During the pandemic, Ms. Louie rescued some 80 dogs, finding them at shelters and farming them out to homes, according to Ms. McAdam.

Tributes have poured in to a GoFundMe site Ms. McAdam set up to help support Ms. Louie’s son.

“Valerie gave us our sweet Boomer,” one grateful mourner wrote. “I have prayed for her everyday since we heard the news.”

“Valerie gave us our Reggie.”

“She helped us immensely with our Zito.”

I can testify too. I first saw Uncle Mort, a tortured little soul, in the back of Ms. Louie’s Toyota RAV4 in early 2018. It was just another Saturday for Valerie, taking dogs to an adoption event at a mall on the southern edge of San Francisco.

I had lurked at the event on the prior two weekends, that must-have-dog feeling rising inside me. My wife, Meredith, long reticent because of her husband-won’t-take-care-of-dog feeling, had seemed to be softening to the idea.

The huddled creature was part longhaired Chihuahua mutt, part-depressive. He was 3 years old, and much of his life had been spent locked outside because the man of the house didn’t like his vibe, Ms. Louie told me

I told her that I would like to give the dog a try but had to do some convincing on the home front. She got it immediately. She had done it hundreds of times — the veritable trial run for the family on the fence about bringing in a new member with fur and a troubled past.

I signed the papers and, a few days later, Ms. Louie dropped him off and assessed the fit. She looked around approvingly while the dog deposited his opening gambit on our carpet. His given name was Franco. That did not fit.

Franco sounded like a Spanish dictator. The weathered soul in our house, while only 3 years old, looked more like an ancient member of the British Parliament. We christened him Uncle Mort. That had been the name of a character in a comic strip I had written for a decade; dog and comic-strip character looked strikingly alike.

The new name fit all the more when we witnessed his early behavior, which entailed looking nervous when awake but mostly sleeping with an outsize snore that sounded like your great-uncle after Thanksgiving dinner, passed out on the couch.

We called a dog trainer to come see if Mort might learn to love and be loved. The trainer was dubious. “He’ll be a good dog, but don’t get your hopes up that he’ll be the family dog you imagined. He’s had a rough go.”

We got our hopes up. We were rewarded.

Uncle Mort has become the most loving and beloved creature in our house, some days exceeding the children in both respects. My wife is his “person,” and when she returns home from an absence, no matter how brief, he goes bananas as if he has just discovered the ocean.

Now, Meredith calls Uncle Mort her “forever puppy.” Such is the state of Mort’s relaxation these days that he regularly lies in various positions of seemingly impossible geometry and vulnerability, all four limbs in the air so that he may be petted around the chest and neck and ears in the manner to which he has become accustomed.

Uncle Mort — or simply “good boy” — became the veritable dog-in-the-window we always dreamed we’d take home, and so it really hit our household when we learned that Ms. Louie was in the I.C.U.

Hers is a typical Covid-19 tragedy. It’s not clear how she contracted the disease, and it took her on a fatal roller-coaster ride.

On Oct. 29, she texted Ms. McAdam, her close friend: “I’ve not been this sick in forever. I can’t break the fever.”

On Nov. 11, a friend went to her house to check up on Ms. Louie and found her in dire straits. She was transported to the hospital and promptly intubated.

Ms. Louie’s son is taking college classes, studying to be a nurse, and recently picked up his mom’s role and helped find homes for the last three dogs that she had committed to place.

One was Blitz, a gray terrier mix who is deaf. Then there’s Bronco, a long-haired dachshund, and Tavish, a one-eyed pug.

“That was a real Valerie dog,” Ms. McAdam said. “Those are the dogs she rescued.”

At Highland Hospital, where she worked, her loss was felt deeply too. Michelle Hepburn, director of emergency services and trauma at Alameda Health Systems, which operates Highland, adopted Bella, a pit bull puppy, with the help of Ms. Louie.

“Her passion for caring both for people and fur babies was evident in every waking moment,” Ms. Hepburn said.